KHC volunteers were awarded the Queen’s Award for Voluntary Service (QAVS) in June 2020, the highest honour bestowed upon local volunteer groups to recognise outstanding work done in their own communities. It is the equivalent of the MBE for such organisations. KHCF is one of 230 charities, social enterprises and voluntary groups to receive the prestigious Award this year.

QAVS was created in 2002 to celebrate the Queen’s Golden Jubilee. Recipients are announced each year on June 2, the anniversary of the Queen’s Coronation. Award winners are wonderfully diverse and include volunteer groups of all sizes from across the UK. The number of nominations has increased every year since the Award was introduced, demonstrating that the voluntary sector is thriving and full of innovative ideas to make life better for those around them. KHCF is run by over 300 dedicated volunteers over a weekend in September. Located in the Chiltern Hills outside Princes Risborough, the event is a revival of an historic annual hill climb for motorcars and motorcycles which dates from 1910. Volunteers plan all year round to offer the 12,000 visitors an inspiring weekend with a wonderful array of vehicles and good value for money entertainment options for the whole family. Since the first revival in 2009, the event has raised over £765,000 for local charities and good causes. At its heart, KHCF has always aimed at preserving the spirit originally created by those dedicated amateurs over a century ago. For many, it is considered to be the most genuine and quintessential classic motoring event in the country, often referred to as “a garden party with cars”.

More than 300 KHCF volunteers will receive the Award from the Lord Lieutenant of Buckinghamshire later this summer. Furthermore, two volunteers will attend a garden party at Buckingham Palace in May 2022, along with the other recipients of this year’s Award.

John Biggs, the KHCF Organiser, commented: “ Kop Hill Climb is run totally by over 300 incredible volunteers, characterised by their commitment, passion and skill, who together create a unique event only made possible by their sustained and selfless voluntary service”.

Want to be part of the team?

If you live around Oxfordshire, Herts or Bucks, here’s a chance to be part of one of the UK’s most successful motoring events; one that thousands of people come to enjoy every year.  What’s more, you’ll help make a significant difference to peoples’ lives, as Kop Hill Climb is the biggest raiser of money for good causes in the county.

We always need help on the weekend and in the run up to the event itself. So how about being at the centre of the action as part of the team that helps steward the event?  In the days before that might be lending a hand erecting marquees, helping the safety team or guiding in exhibitors trucks. At the event weekend the team are involved in everything from checking vehicle passes to directing all the cars, bikes and clubs to the right places. Without stewards the event just wouldn’t take place.

Have time throughout the year and like classic cars and bikes?

The Entrants Team needs extra help in 2021. This is the team charged with locating and signing-up more than six hundred interesting cars and bikes. It’s about talking with the clubs, the museums, tracking down those celebrity vehicles and helping all the drivers and riders to get booked in to display or run the hill. You’ll need computer literacy and experience in running organisational systems, plus a real enthusiasm for classic and exotic car and bikes.

If you would like to get involved then please contact the volunteer team by emailing: [email protected]

We’re also thrilled for the Kop Hill Climb festival to be entered into the Princes Risborough Roll of Civic Honour for exemplary service to the community: 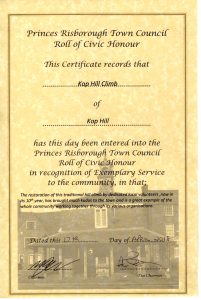