We are very saddened to report the passing of Tony Davies, BEM on Thursday 23rd December 2021.

Tony was a founder of the Kop Hill Climb Revival as a leading member of the Risborough Area Community Action Group (RACA). In 2008, he began his research into the history of the original Kop Hill Climb Competitions which took place from 1910 to 1925 with the intention of holding a centenary celebration event in 2010 to promote the town.

Having gained the support of local authorities who provided some seed corn funding for such an event, Tony formed a Kop Hill Climb Committee for RACA and started negotiations with the local school and other landowners to provide the land for car parks, paddock area and spectator viewing.

A decision to run a ‘trial’ event in 2009 was taken together with policy that the event would not be a timed competition and would be for the benefit of local charity.

Tony and his team were able to achieve the support of Princes Risborough Rotary Club, local residents and the community to provide a volunteer task force to steward the event. In addition, the British Motorsports Marshals Club (BMMC) was appointed to marshal the hill and the paddock.

A rain wash out was always feared but 23 September 2009 dawned chilly but with blue skies and a glorious weekend unfolded with temps up to 20c. In 2009 500 spectators came and raised £20,000 for local charities.

The annual KHC Festival is now one of the biggest in Bucks and in 2021 attracted, despite Covid and petrol supply shortages, 16,000 spectators and raised £105,000 for local charities in the Aylesbury, Wycombe and Risborough area. Sadly, it was to be Tony’s last event. 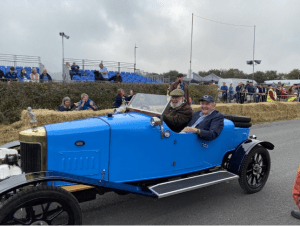 In addition to Tony’s great contribution to Kop Hill Climb Festival, Tony was passionate about the Risborough Area and was a former recipient of the Town Council’s Citizenship Award.

As the founder of Risborough Area Residents Association (RARA) in 1988, Tony worked closely with the then District and Town Councils to successfully protect our area from unwelcome development and he continued to remain a great friend and supporter of RARA offering great insight into the machinations of local government.

Tony was awarded the British Empire Medal (BEM) in June 2016 as part of the Queen’s birthday honours for ‘services to charity through the Kop Hill Climb and to the community in Princes Risborough, Buckinghamshire.’

Our thoughts are with his family at this time.