It is with the utmost regret and sadness that KHC announces the passing of Paddy Hopkirk MBE on the evening of Thursday, July 21 at Stoke Mandeville Hospital at the age of 89. Paddy found legendary fame when he won the 1964 Monte Carlo Rally in his Mini Cooper, 33 EJB, but he also built a successful business career, worked tirelessly for a wide range of charities, played a prominent role in the quest for safer driving with the Institute of Advanced Motorists and was a stalwart of the British Racing Driver’s Club.

Closer to home, he was an early supporter of the Kop Hill Climb from its revival year in 2009 and was our most respected and revered patron. Until his passing he was still providing enthusiastic support for the event which was close to his heart. He never failed to entertain, be it on the track, in meetings or at the myriad of after-dinner occasions when he was the guest speaker. A man of his time, he is truly irreplaceable.

A much fuller and more personal appreciation of Paddy’s impact on KHC will appear in this year’s Festival programme.

KHC extends its deepest condolences to his widow Jennifer, children Katie, Patrick, and William and their six grandchildren, whilst also remembering the fun that he brought to us over so many years. 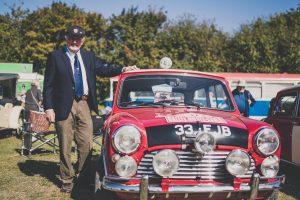