Maria Costello is probably the most prominent woman in motorcycle road racing and the only female motorcycle racer ever to be awarded an MBE. She has achieved unrivalled success in a high-risk world, competing on equal terms with men in a sport renowned as the ultimate test for competitor and machine.

Maria was the first woman ever to claim a podium finish in a race around the notorious Isle of Man TT course – often described as the world’s most dangerous race track – but that’s just one of many accolades she has garnered in a career spanning 20 years (a feat itself!).

The 2016 race season has proved to be one of her best, securing the female lap record at the Vauxhall International Northwest 200, her best ever finish, so far, of 12th place in the Isle of Man Lightweight TT race and a podium alongside her hero and 23 times TT winner, John McGuinness in the Isle of Man Senior Classic TT.

Throughout that time, she has shown remarkable resilience and determination in the male dominated world of motorcycle racing, overcoming astonishing injuries – including 24 broken bones – to gain multiple podium finishes in real road racing.

She has also set a Guinness World Record, been voted Sports Personality of the Year in her native county, become an animated character in a PlayStation game, a rider double for Reese Witherspoon in a Hollywood movie and a published author.

Maria’s racing has taken her around the globe and the invitations for her to compete on exotic modern and classic machinery continue, adding to her already impressive racing CV.

Never satisfied with confining her success to the track however, she breaks boundaries to pave the way for more women racers and motorcyclists alike. In 2013 she founded ‘Woman on a Motorcycle’ a community space where like-minded ladies can share experiences and ideas. Her pioneering ‘women only’ trackdays have also gone from strength to strength; starting with just 11 riders at the Teesside Autodrome circuit, she now runs events for up to 70 riders at the world renowned circuits including Donington Park and Silverstone. In 2016 she was also appointed by BMW Motorrad UK to front their nationwide initiative supporting women riders.

Maria was inducted on to the Federation Internationale de Motorcyclist (FIM) Women in Motorcycling Commission in 2013 and is a mentor for the young riders competing in the European Junior Cup. She is also an Ambassador for ex-F1 driver Susie Wolff’s ‘Dare to Be Different’ campaign to drive female talent.

Her position in the sport is undeniable and her following reflects that with over 280,000 followers on Facebook alone. Twitter is an impressive 19,000 and her new Instagram page already has almost 5,000 followers.

Her undeniable uniqueness, the fact that she’s a woman challenging gender stereotyping and succeeding in a male-dominated area, also attracts elusive and highly sort after coverage from all forms of media: lifestyle, tabloid & broadsheet newspapers, TV, radio and online media. Her talents, achievements and extraordinary story have made her a popular Keynote and motivational speaker too.

Maria is a 2017 IAM RoadSmart road safety Ambassador and also a Competitor and rider for BMW Classic, from 2014 to the present day. 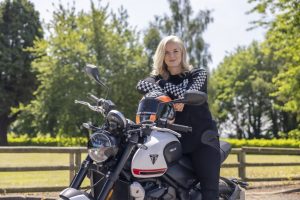